Want a destination with dreamy turquoise blue water, the highest mountains in Africa and the most ferocious creatures on the continent? Tanzania is your place. With the Serengeti, Ngorongoro and Mt Kilimanjaro alone - this country is an adventurer’s paradise. So grab your safari gear and binoculars, we’re headed to Tanzania for a real taste of Africa!

Hands up if you'd rather be on safari right now! 🙋🏻 Tanzania is a nature lovers DREAM. Global Traveller @ashleytarleton taking some time out to explore the epic Tarangire National Park on our Tanzania Community Volunteer Trip 🙌🏽

It’s safe to say Arusha, known as “A” town by the locals, is the safari capital of the country. Often serving as the starting point for safaris to the Serengeti and Ngorongoro Crater (For those headed on our Tanzania Community Volunteer Trip). If you’re willing to sacrifice a day for the experience, Tarangire National Park is a must or if you’re strapped for time, there’s always the option of Arusha National Park instead.

Situated at the base of Mt. Meru, it’s a popular "warm up" trek for Kilimanjaro climbers (usually takes around 3 days). But Arusha certainly has plenty to keep you occupied if the great outdoors isn’t your cup of tea. Relax by the pool at the Mount Meru hotel, party the night away at the vibrant bars and clubs or explore the bustling streets by dala dala. They are always jam-packed with riders but it's a fun way to get up close and personal with the locals.

Pencil in a free visit to the world’s only Tanzanite Museum, to learn more about the rare gem only to be found in the foothills of Kili. Go for a bargain hunt at the Maasai Market for amazing handicrafts and try the local fare from one of the street vendors (we recommend chipsi mayai - French Fries Omelette).

We just got this check-in snap from Global Traveller @ashleytarleton who is taking part in our Tanzania Community Volunteer Trip! 😍 So many smiles! #volunteering #arusha #tanzania #preschool #globalworkandtravel #volunteerintanzania #makeadifference #volunteerwork

Moshi is a lovely small town located at the base of Mount Kilimanjaro and is a little less hectic than Arusha. Usually a starting point for trekking expeditions and it’s a great place to spend a few days before or after your epic climb. Take a day trip to the local Materuni Village for an Arabica coffee tour, see the Materuni Waterfalls and try a banana beer! If you’re looking for a more relaxing retreat, grab your swimmers and head south to the crystal clear water oasis of the Kikuletwa Hot Springs.

Conquering Kili tops a lot of bucket lists. It’s the tallest mountain in Africa and the highest free standing mountain in the world. Even the likes of Jessica Biel and Lupe Fiasco have climbed the staggering 5,895m (19,341 ft) to the peak. Although it’s not a technical climb, that doesn’t mean it’s easy. With many different routes up and down dependent on your timeframe and fitness levels, there’s tons of choice - there are treks ranging from 6-8+ days. You have to take a guided hike, and you should be ready for some serious altitude! 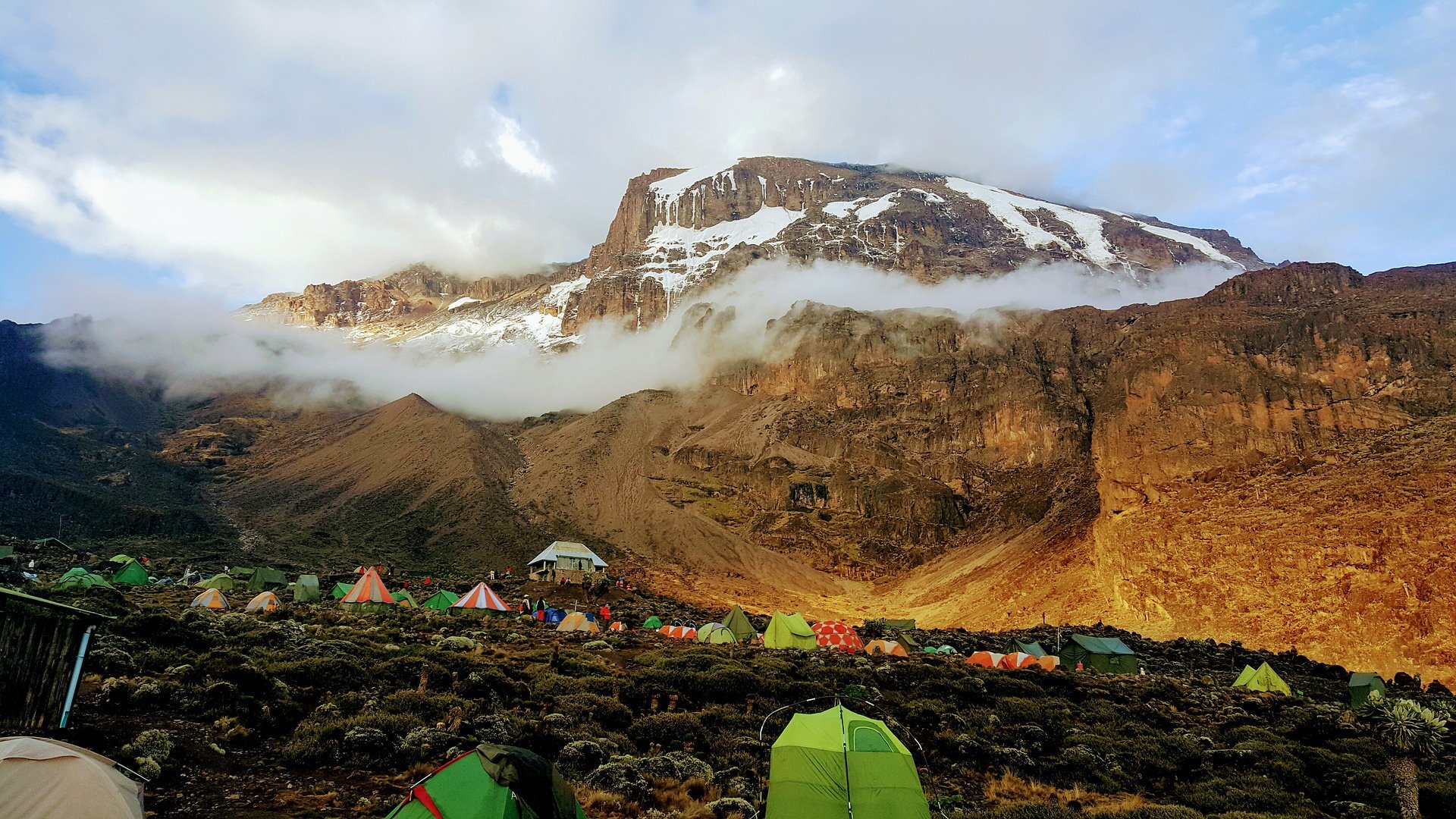 In between the city of Arusha and the Serengeti, is Ngorongoro. It’s the world’s largest inactive and unfilled volcanic caldera. But the real treasure lies within!

The 610m deep crater provides habitat for black rhinos, zebras, elephants, hippos, lions and other amazing wildlife. Whatever kind of safari you’re after, you’ll find it here. One day is usually enough, but if you want to stick around for longer you can get your glamp on.

Few places in the world are quite as the Serengti and it certainly lives up to its name (‘Serengeti’ means ‘endless plains’ in the Maasai language). This HUGE national park spans 30,000km (that’s four-and-a-half times as long as the Amazon River if you’re trying to imagine it) featuring vast and open landscapes, teeming with all the wildlife you could imagine, including our Big 5 favourites! It’s also the one and only place to see the famous great migration. They call it ‘great’ for a reason - this annual movement is one of nature’s greatest spectacles - as you can witness up to 2 million wildebeest, zebra and gazelles rumble across the sweeping grasslands in search of greener pastures.

Just off mainland Tanzania is the turquoise dream of Zanzibar, a little slice of island heaven with history and culture as old as civilisation.

Spend a day in Stone Town, the spellbinding cultural heart and island capital. As the world’s oldest functioning Swahili city, many of the landmarks have been restored. Explore the numerous alleyways of the UNESCO-listed city, visit the Old Dispensary with its carved wooden balconies, the Hamamni Persian Baths and the oldest structure in Stone Town, the Old Fort. Wander the Forodhani Gardens by day and at night it turns into an epic food market, amongst all the buzz and energy, try the delicious fresh seafood - often served with fried potato balls, naan bread and samosas. Yum!

Jambiani is about an hour south of Stone Town, it’s a peaceful village stretching over several kilometres on a stunning coastline and one of the best places on the island to gain an insight into local life. This is where our Zanzibar Community Volunteers head to take part in assisting the locals.

Then, escape north of the island for an Indian Ocean fix. Nungwi consistently ranks among the top beaches in the world. A must do for those adventurous enough with jet skiing, kite surfing and paragliding. If all else fails, jump in a hammock and enjoy the view. Kendwa is a village not far from Nungwi offering azure waters and a great selection of waterfront bars and restaurants.

Down south, you can head to the only remaining natural forest on the island to spot Red Colobus Monkeys in Jozani Forest.

You’ll need a boat to get here

Prison Island, now known as Changuu Island, is just a short trip from the mainland and hosts a former prison and tortoise sanctuary. Enough said!

Mnemba Atoll is perfect for exploring below the surface, with colourful coral surrounding the private island making for an amazing scuba dive. You’ll also have the opportunity to see dolphins and barracudas too!

Changuu Island( PRISON ISLAND ) is a small island 5.6 km north-west of Stone Town, Unguja, Zanzibar. The island is around 800m long and 230m wide at its broadest point. The island saw use as a prison for rebellious slaves in 1860s and also functioned as a coral mine #zanzibardestination • • Contact Benitto for all zanzibar excursions and transfer at reasonable prices 📞 +255743072597 WhatsApp/Calls Or DM

A post shared by ZANZIBAR DESTINATION (@zanzibardestination_) on Oct 8, 2018 at 9:18am PDT

Want to see Tanzania and Zanzibar for yourself? Global will get you there.

Perfect Gift Ideas for Every Type of Traveller