A Day in the Life of an Australian Surf Lifesaver

There's nothing quite as iconic to Australia than the troops of red and gold scattered across the nearly never-ending coastline that makes up Australia. Considered the superheroes of Australia's golden beaches, making sure our safety is their number one priority, who else could we be chattin' about but, the Aussie Surf Lifesavers.

We're hanging with some of these local legends to learn more about what it means to be a part of this awesome surf club culture and so they can solve a few beach mysteries we've always wanted to know. 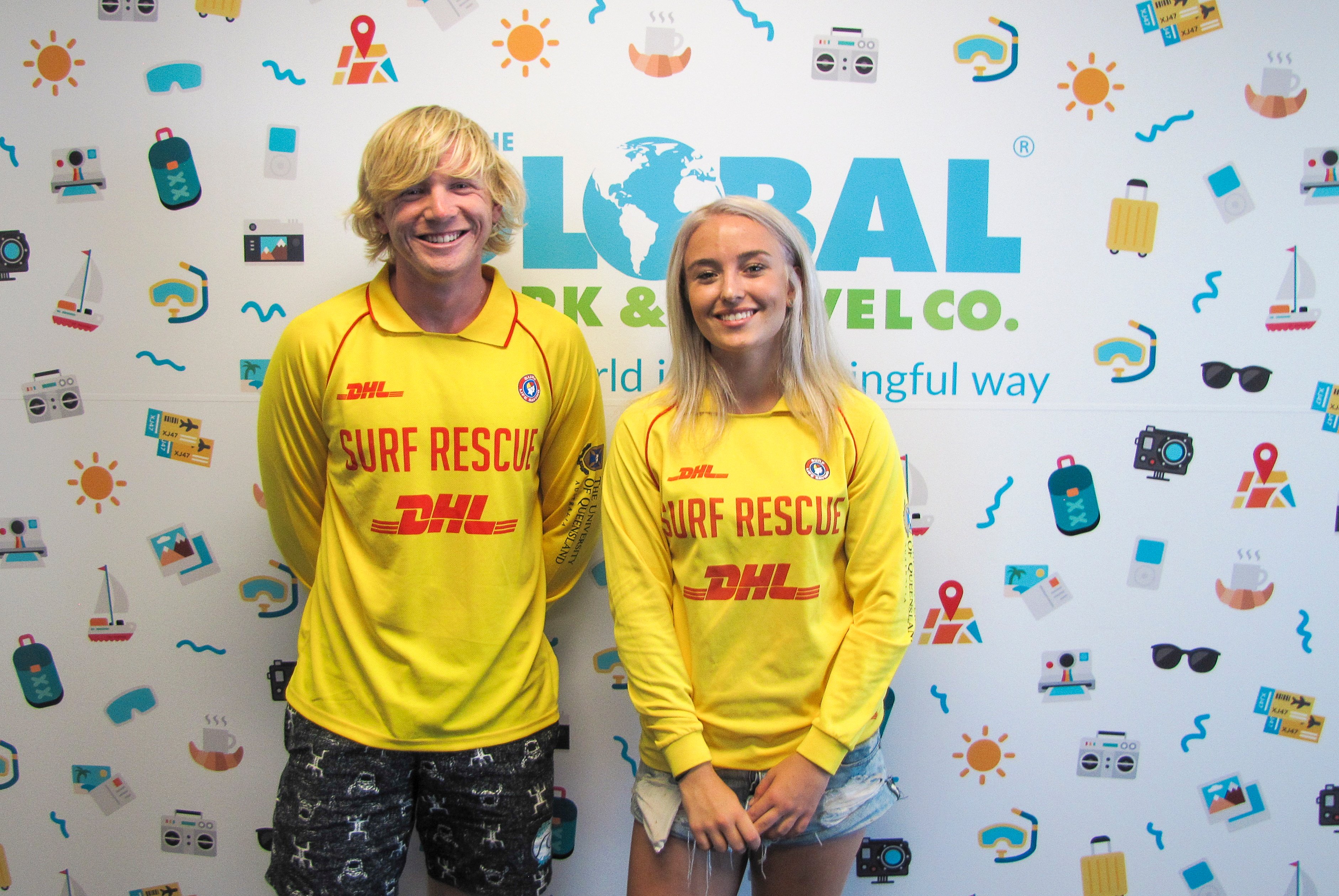 Our chosen Surf Lifesavers Nat (19) & Jack (22) just happen to spend their beach patrolling days on the Gold Coast! A city situated in South-East Queensland, Australia where the beaches are made up of golden sands and perfectly blue oceans.

It also just so happens that the city's lifeguard service was the first in Australia to adopt a formal surveillance tower plan along the coastal strip in 1989. Now with around 39 of these towers popped up on the 52km of coastline that makes up this sunny city we wanted to know what it takes to be a surf life-saving superhero!

Nat became a lifesaver just over four years ago when she moved to the Gold Coast all the way from Sweden to take in the hot weather and open her world to a mass of opportunity. Jack (also known as "Stingray" for closing down an entire beach on his first stint after a stingray was spotted, whoops) has been in the lifesaving game for a good seven odd years.

Both have a serious love for the beach and educating Australians and its visitors on beach safety.

What would you say is your favourite part about being a lifesaver?

Nat: I love the different opportunities we're given and being part of such a large organisation where you can meet a lot of people with the same interests and makes you feel good to be part of that.

Jack: Camaraderie (meaning mateship), I've met all my best mates, surf club pals and had so many great opportunities.

We've always wanted to know for sure but, can you let us know what the difference between a lifesaver and a lifeguard is?

Nat & Jack: A lifeguard is your Monday to Friday professional job and those guys get paid, they do patrolled beaches, public swimming areas and it's their sole mission in life. Then you've got your lifesavers who come in and we're volunteers that step in during our own time to patrol for the day.

So, everyone wants to know since Australia is famous for a few sharp toothed creatures residing along their shorelines...how often do you see sharks and have you ever seen anyone get attacked?

Jack: In my whole seven years, I have never seen a shark on a beach. Most of them tend to hang out in the canals.

Nat: "I have seen one shark in four years and it swam away from me. I would say it was more scared of me than I was of it.

That's always reassuring, but, what about those lovely little jellyfish we've also heard about?

Nat: To be honest none of the really dangerous jellyfish really hand out down this way, it really depends on where you are. If you do get stung though we recommend vinegar to keep the pain at bay.

Ok, surf superheroes, how many people have you rescued?

Nat: I would say Christmas is pretty busy, I saved around 25 people then over my time as a lifesaver probably 40-50 people that were mostly tourists not swimming between the flags.

Jack: There's been about 5 that were pretty close calls from people stuck in rips. Tally Creek especially, it looks calm and flat, but underneath there can be a fierce tide that will sweep you under. You can't see tidal currents, so it's pretty dangerous, that's why we get those flags up every morning - to keep everyone safe!

Your best advice for swimmers on any Australian beach?

Jack: We get there really early in the morning to look for the safest spot, set everything up and put up the flags. If you're around feel free to come and have a chat with the lifesavers, we love educating people and love to say g'day. I'd say sunscreen is most important; you can get burnt just walking down from the top of the beach to the water!

Nat: The most dangerous thing on the beach are the rips under the water, so, if you do get caught just make sure to stay calm, raise your hand for awareness and to avoid any of this just swim between the flags! You are super guaranteed not to get stuck in a rip if you're in between the flags and that's their sole purpose of being set up every day.

For the next generation of lifesavers, how would someone go about becoming a lifesaver? Can anyone do it?

Nat: We always need people! Basically, you have to be 15, able to swim at least 400 meters in under 9 minutes but, there is plenty of training involved to get you there when you go for your Bronze Medallion.

Jack: To become a lifesaver you do an 8 week course and the first thing you learn is self preservation. Realistically anyone can be part of this culture be that a lifesaver, first aider, radio operator, trainers, there's opportunities for everyone. It is such a diverse and open organisation.

Tell us the coolest thing you have had happen in your time as a lifesaver?

Nat: Becoming Patrol Captain and Club Captain of Tally SLSC. They're both two major roles that are pretty massive within the club that have taught me a lot of life skills that I will definitely use in the future.

Jack: So, I was approached to be the dummy in a demonstration at Kurrawa SLSC (only good looking dude on call that day, obviously!). I pretended to be drowning in the ocean and the rescuers jumped out of a rescue helicopter to "save" me. They came down grabbed me and I got to ride along in the Westpac lifesaver chopper. These guys have a 365 day rescue service that spot rips, sharks and things from above.

Is your favourite show Bondi Rescue?

Nat: We watch it, wouldn't say favourite. Why are they always so hot?

Lastly, can you let us know about the choice of the red and yellow coloured flag?

Well, being a lifesaver seems to be a pretty sweet gig, and we're sure grateful to have this incredibly dedicated team out there making sure we get to enjoy the sand and sea in the safest way possible.

If all that ocean talk has you craving some Vitamin Sea, might be time for a little trip to the land of OZ to see what else Australia has on offer. It's just a simple click of a button below.