A Global Travellers Guide to Vancouver with Michael

It took me a while to pin down what felt so odd about Vancouver for the first day or so, but I think I’ve worked it out - it was everything being built on a grid. Somehow that made it feel not really like a proper city for a while. An entirely wrong impression, but interesting that my gut assessment of what constituted a ‘proper’ city was so closely related to age and winding-ness of streets.

The atmosphere seemingly saturated with cannabis smoke and faint air of greasiness didn’t really help, but once again in fairness to Vancouver, I think the greasiness was as much to do with the state that I was in after the long journey.

One of the first things I did in Vancouver was to get comprehensively lost. Quite a feat in such an orderly city - I blame the jetlag and every street looking roughly the same for the first 48 hours or so. Which was also probably thanks to the jetlag. Either that or it took a while to adjust to the ambient fog of cannabis smoke. In any case, it leads directly to this rather lovely view: 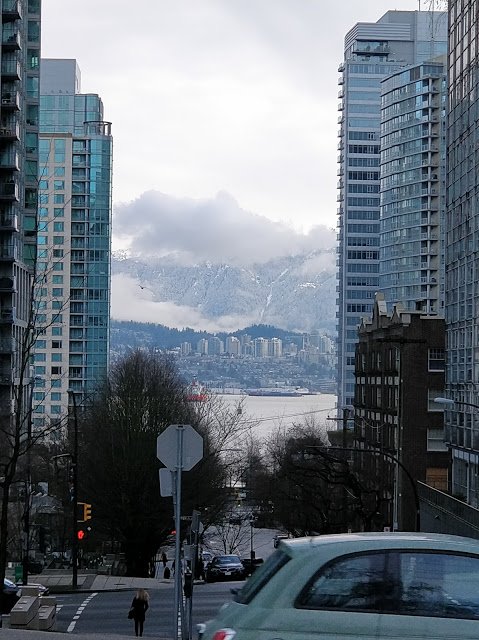 Being the curious sort of chap that I am, I wandered down to the water's edge and was rewarded with an even more impressive panorama. If I've worked it out right, this was the view from Coal Harbour Park. And just around the corner from that, I found a lovely little spot called Portal Park.

I've always had a fondness for these urban follies, or whatever else you may choose to call them, so this find was a particular treat for me. 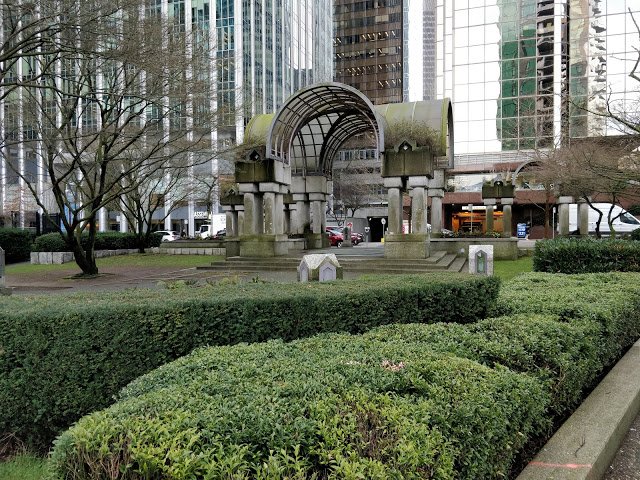 An interesting little spot - constructed above the north entrance to the Canadian Pacific Railway tunnel to mark a handover agreement between the CPR, B.C Transit and the city of Vancouver regarding the ownership of the tunnel. It also has a surprising cinematic pedigree, having been used in Arrow, The Flash, and iZombie, among others.

One of the highlights of Vancouver has got to be its oldest quarter - Gastown. Home to a fascinating steam-powered clock, some delightful architecture, and the statue of the man for whom the area is named, “Gassy” Jack Deighton, the Yorkshire steamboat captain who opened the area’s first saloon.

I wasn’t able to spend quite as much time exploring the area as I would have liked and ended up on Water street for most of it. The most touristy stretch, apparently, but jolly good nonetheless.

The clock is particularly interesting. It runs off steam from the low-pressure steam network that provides heat for downtown Vancouver, driving a system of chain lifts and steel balls that keep time, and trigger the steam whistle 'chimes'. A 1977 addition, rather than an 1800's original, but a beautifully designed and constructed one. 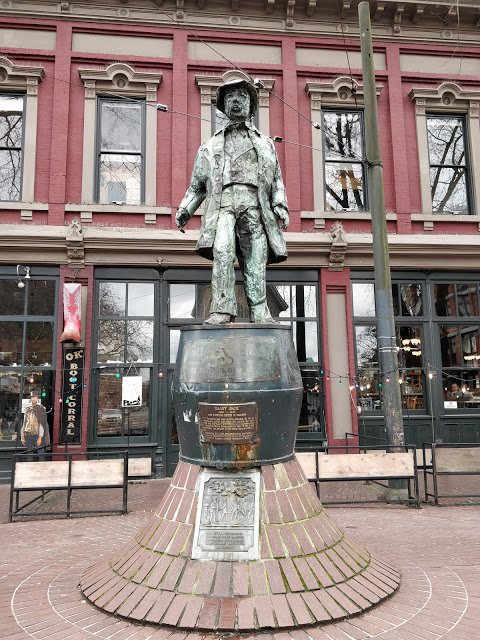 Next, Stanley Park! The park also dates from 1886, the year the city of Vancouver was incorporated, and is named after Lord Stanley, 16th Earl of Derby, the Governor General at the time.

I think that’s probably where I spent most of my time in Vancouver (in terms of places to visit) and certainly where I took the majority of my photos and videos. And I think it’s probably those that say the most about this fantastic place.

For the record, it turns out that the herons are Great Blue Herons, part of one of the largest urban colonies of the birds in North America.

During my visit, the seawall was under repair, sadly, so I was unable to walk the whole perimeter. However, I did manage to take in some of the key sites. First, the totem poles, which record some of the histories of the indigenous people.

From the two totem poles below, the one on the right is particularly interesting. It is the funerary pole of a notable chieftain, decorated with relevant spirit-animal figures, and the moon, the chieftain's symbol, set at the top in the centre of the rectangular board. A board which would, apparently, have been used to conceal the cavity in the top of the pole in which his body would have been placed. I don't know about any of you, but I'd never heard of that as a form of burial before. 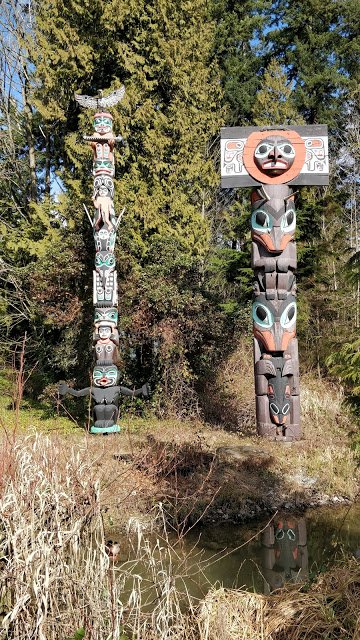 Another area of interest is Granville Island, which has a fascinating selection of craft and artisan shops, as well as a great public market. I wasn’t able to get many pictures, but the best way I can summarise the place is to say that it’s like every other market or craft fair you might have been to, but with more interesting stalls replacing all of the women’s clothing stands. Well, more interesting to me anyway. You’re free to disagree.

If you ever find yourself in Vancouver, and you have a taste for unusual and exciting foods (or handmade ceramic gnomes...), then Granville Island and the public market are an absolute must.

Of less interest to most of you, perhaps, but somewhere that I found absolutely delightful, was the Vancouver public library. Mostly because of the fantastic building, and excellent views of the city that it offered, but also as somewhere to retreat from the bustle of the city for a bit. Which, to be fair, is much less severe than in most cities, but I am not an urban creature and was still feeling somewhat overwhelmed. Plus it has a lovely little row of cafes opposite the actual library right there in the building, including one that does bubble tea.

And if that wasn't good enough, you get some jolly fine views of the city from the roof as well.

A post shared by Vancouver Public Library (@vancouverpubliclibrary) on Apr 4, 2019 at 10:02am PDT

Seeing as I was in Canada and in need of a quick dinner, there was only one sensible choice - poutine! Having been given a recommendation by the splendid people at The Global Work & Travel Co., who have done so much to get me here, I headed to Fritz’s European Fry House for my first experience of this notorious Canadian… delicacy?

Delicate it may not be, but delicious it certainly is! Especially topped with Montreal style smoked meat. I didn’t actually know what that was at the point that I ordered it, I just saw ‘smoked’ on the menu and made a snap decision. As per usual, ‘follow the smoke’ turned out to be a very good rule to follow (when it comes to food, anyway). No longer will I doubt those who swear by chips and gravy. Chips and chocolate, I’m still unsure about, but this? This is good. Try it. Try it. 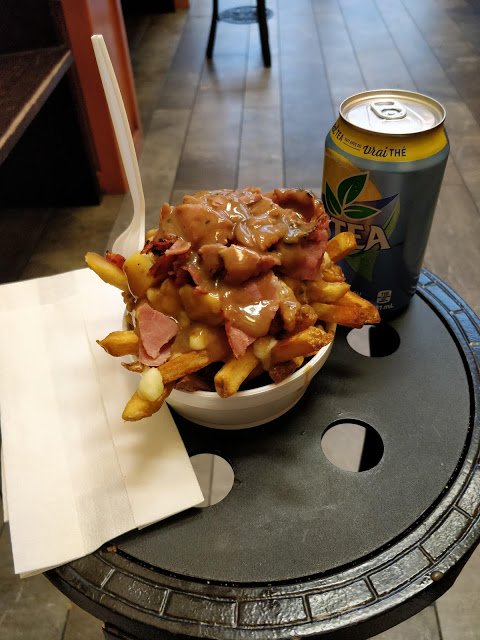 After that, I was just about time for sunset at English Beach. Just round the corner from Sunset Beach, which is supposed to be one of the best places for sunset, but I had a couple of reasons to choose English Beach instead.

The Vancouver Inuksuk, a traditional indigenous navigation marker. Whilst this particular one was built in 1986 by Alvin Kanak; they are fascinating ancient structures. The name is formed of the morphemes Inuk (human, person) and suk (substitute), meaning roughly 'that which acts in the place of a person', and they can act variously as markers for travel routes, food caches, fishing sites, burial places, and more besides. The difference in shape and structure to indicates which ones are which, in a remarkably sophisticated manner. I'll do a longer post about them later, as there seems to be quite a lot to write. 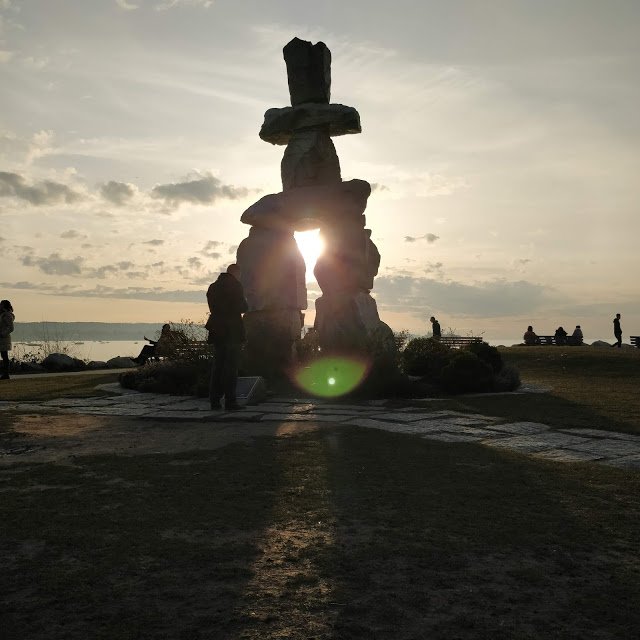 And whether strictly the 'best' spot or not, I'm still pretty darn happy with the shots I got. A bit less cloud might have been nice, but given that I'm still working with a phone camera at the moment, I might not have been able to get a decent picture of anything without it, so perhaps it's just as well.

The second reason was to be in walking distance of my last stop for the evening: back to Stanley Park for the firing of the 9’o clock gun! And on my way there, I had my first encounter with an interesting bit of Canadian wildlife…a wild raccoon! And an astonishingly calm one at that. It hardly paid me any attention while I stopped, took pictures, and then just walked past it. Then, on to the gun itself.

An 1812 12 pounder fired at 9pm every day. Brief research suggests that this is because people like that better than when they used to shoot it at 9pm and 9am. If I find a better reason as to why they fire it at all, I shall let you know. Although when you consider the firing itself, I think it is fair to say ‘because it’s fun’ is all the reason needed.

And that concludes our brief(ish) look at some of the highlights of Downtown Vancouver.

You can follow Michaels blog An Eccentric in Canada or his Insta adventures to keep up with his inspirational journey, OR you can get going on your very own Working Holiday adventure just by clicking that little green button.

6 Types of Immersive Experiences You Can Do Around The World